& Par 4 Golf Management, the LVDGC, PDGA, and DiscGolfValues.com​ was a 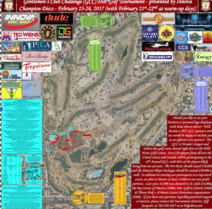 2017 Gentlemen's Club Challenge at  WildHorse Golf Course was a HUGE success with almost 600 players enjoying 3 Championship Disc Golf Courses.  A HUGE THANKS to Jeff Jacquart, Scott Merritt, Peter Beaulieu, Jessica Jacquart, Nick Mountain, Dodie Ricker, Jessie Hynie, Chris Arnold, Pam and Joey Madrid, John Miranda, the LVDGC Board and many, many volunteers Las Vegas Disc Golf Club members, the PDGA and all of the many volunteers that worked so hard to get the course ready to play and cleaned up afterwards, the spotters and anyone else that I might have forgotten   Also want to Thank Mike Mline & Utah Open team for setting up the 3D Pyramid. And, finally I want to THANK Derrick Hunter and Jon Waddington and their staff for all their Support!  If I missed your name I apologize and if you let me know I would be happy to add it. I also have to THANKS Innova Champion Discs, DiscGolfValues.com, Adidas TERREX and all of our other great Sponsors.

All things LVC (Las Vegas Challenge) can be found at